A Stage By Any Other Name....Is STILL Melanoma

When I was first diagnosed with melanoma, April 2011, I was told by my dermatologist and surgical oncologist that I was stage 2a.  I had to undergo a wide excision biopsy which left me with a 7 inch scar on my leg that looks like a shark bite.  I had a lymph node removal and was sent home to wait for results and recover.  It was the darkest time of my entire life.  I reached out on Facebookland and through the internet, I was led to several of my now friends.  They really helped me through the darkness and have been supportive and understanding.  I was told with stage 2a, that I was good to go, since my surgery got all the melanoma and the lymph nodes were clear, but I couldn't help but worry that melanoma was lurking somewhere inside of me, undetected, and was not going to be found until it was too late.  I have struggled with this so much, that in June I went to see a melanoma specialist at the University of Michigan for a second opinion.  They read my original slides, and told me I was not stage 2a, but stage 1b.  It was hard to adjust to.  Mostly because, I had also been struggling with the fact that some of my new friends where stage 3 and 4 and were going through horrendous treatments.  Some had passed away.  I felt like being a stage 1 or 2 was not significant.  I felt like I had no right to say I was a warrior.  I felt guilty.  I was going to a cancer support group and I met one of my dear friends there, that is fighting Stage 4 melanoma.  She has gone through hell and she does it with such dignity and strength.  I felt guilty that she was going through so much, when I was told I was done and clear.  I felt uncomfortable at the group since I was not going through a battle like they were.  I felt like I didn't belong.  I couldn't imagine going through what my stage 3 and 4 friends were going through, and I was scared to find out someday.

Then one day, I realized that it was MY feeling that way and no one was saying that my journey was any less than anyone else's.  No one was telling me I was not worthy of being called a warrior.  I was accepted as a stage 1 WARRIOR by everyone.  We are all dealing with different stages of melanoma and I don't mean statistical stages, I mean different stages, just like in life.  We are all somewhere different in our journey, and we come together and support and love each other, even though most of us have not met before.  And would not be connected without melanoma.  We have a bond that is like family even though I may not talk to every one of my fellow warriors, I enjoy knowing how they are doing and being part of their lives. Supporting the ups and the downs.  Mourning losses, celebrating milestones, and sharing experiences, joy, sorrow, and tears.  Hugs and many prayers pass over cyberspace between us.  I personally, have felt nothing but support, until recently.

I have never been so hurt and disappointed, since joining Facebook, as I was yesterday.  I was mourning the loss of my dear friend's daughter, who passed away, by spending time with my daughter out of the house away from Facebook.  I knew that I shouldn't spend the day crying, and instead I should grab every opportunity to spend time with my loved ones. But, I did cry. We went to see Les Miserables, and I cried a lot.  My daughter was next to me and I know how precious that is.  We had a great time together. When I got home, I went on Facebook, and that is when I saw this:

"Today I am going to tick people off...just because I can...and because I am angry because we lost "___" to Stage 4 Melanoma.  My heart goes out to people who have been diagnosed with Stage 3 and Stage 4 because they have a REAL battle on their hands.  People with Stage 1 or 2 have very good odds of living a NORMAL and long life.  I resent the fact they continue to draw attention to themselves while the real warriors are fighting for their lives.  I resent it when Stage 1 and Stage 2 people compare themselves to late stage warriors when they haven't had to FIGHT.  I had to get this off my heart."

I have a huge problem with this for so many reasons.  I believe in freedom of speech, and this was (purposely) put on her personal Facebook page and not on a group page for all melanoma warriors in the group to see it.  First of all, she started off by saying she is "going to tick people off...just because I can."  So she was upset by a fellow warrior passing away and decided to tick off people that love that young warrior, by cutting them down?  I am not only offended because of what stage I am, I am offended that she, as a supposed friend, doesn't care about anyone with Stage 1 or 2.  We didn't go through a REAL battle?  We aren't still going through a REAL battle? Hmm.

Second, we all know what each stage means, and we all want to be stage 0, 1 or even 2...and stay there!  But, we all know one loose cell and a stage 1 can become a stage 4 in a heartbeat  Does this mean that any one person is less important than another?  I agree that our stage 4 warriors are fighting for their lives and I HATE it. I understand that stage 3 warriors are in trials, hoping that they will become NED and never advance to stage 4.   I DON'T understand the resentment towards others because of what stage we may be.  I feel that hate like that is not good, ever.  We should be "stage-blind" when it comes to melanoma, because stage can change.  It is melanoma.  That alone is scary.    I thought this person was my friend, but then I find out that she looks at us all as a stage and that we are only considered warriors if we are a stage 3 or 4 in her eyes.   It is her opinion and unfortunately it has hurt a lot of hearts.  The comments that proceeded were many and they have since been deleted.  I tried hard not to let it get to me, but it did. 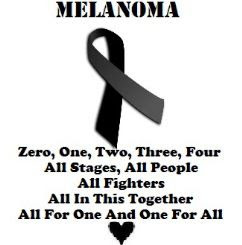 I think we all need to bond together, and especially at a time like this, remain positive and supportive.  Anything less is just destructive and hurtful.  We are all fighting the same beast.  It is laughing it's ass off because we are destroying each other with negativity.  We need to remember,we all have special things and special talents we bring to the melanoma table, and we ALL have times when we are frustrated and angry.  We may not always see eye to eye and we may decide not to like what someone says, just like a family.  But if we start destroying the family, what do we have left?

And I had to get THIS off MY heart.