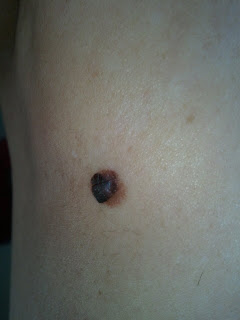 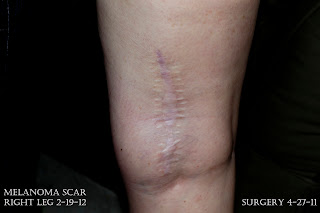 Today would have been Bob Marley's 67th birthday.  He passed away on May 11, 1981 at age 36 due to METASTATIC MELANOMA.  I found this out when I was first diagnosed.  Most people don't know how he died, but they know he made great music.  He still is the biggest selling Reggae artist today.  The melanoma was on his toe, under the nail.  After several injuries to his toe, he finally saw a doctor. They wanted to amputate, but he didn't believe in it.  Eventually it spread to his lungs and brain.   He didn't believe in Western medicine and delayed treatment for 4 years before it took his life. RIP Bob.

We don't hear much about melanoma in famous people.  There have been several celebrities that have had it including President Ronald Regan's daughter Maureen, who died from metastatic melanoma.  President Regan had several skin cancers removed himself.  Actress Cybil Sheppard had melanoma removed from her back.  Senator John McCain also had melanoma.  Burgess Meredith, the actor know for his role as the trainer, Micky, in the Rocky movies and the father of Jack Lemmon in Grumpy Old Men, died from a combination of melanoma and Alzheimer's.

Melanoma doesn't discriminate.  Protect your skin by using sunscreen every day, avoid sun exposure, and see your dermatologist.  Doing monthly skin exams in addition to having regular skin screenings by a dermatologist are key in early detection.  Teach your children to take care of their skin.  And most of all...never, ever use a tanning bed, or tan outdoors, EVER!  Tanning beds increase your risk of developing melanoma by 75%!  It only takes one visit to do irreversible damage.

Today, at work,  someone said they NEEDED to go tanning.  (yes they used the word "needed"!)  I was shocked and said, "Please don't do that!"  I was very upset!  She said it before thinking about me and my melanoma.  She didn't mean anything bad towards ME when she said it, but I took it personally.  I was kinda shocked at how quick I reacted and how I didn't hold back my feelings.  She immediately said she was sorry and looked kinda embarrassed.   I told her that if she ever decided to tan again I would show her the scar on my leg and that would change her mind real quick!   I told her to get a spray tan instead if she wanted some color.  Baby steps....I will never stop educating.  This beast needs to stop killing and destroying lives and families.  I am so sick of it.

My daughter is in Florida right now on a trip with her dance mates.  We packed a ton of sunscreen and I reminded her to reapply every 2 hours.  I was worried that she would get burned, she is very fair skinned.  She texted me tonight, very proud of herself, that she had lots of fun and didn't get burnt!  Makes my heart full knowing that by my experience, she has leaned to care for her skin and that will be passed down to her kids, and on and on.  Maybe some day melanoma caused by sun exposure,  will be a thing of the past.  I can only hope.
Posted by Unknown at 7:53 PM 3 comments:

Don't believe everything you hear....

It has recently been in the news that the government did an investigation into the tanning industry.  A survey was conducted by the U.S. House Energy and Commerce Committee. Committee investigators posed as fair-skinned 16-year-old girls, and contacted 300 indoor tanning salons throughout the country. Of the salons contacted, 90 percent told the "girls" that indoor tanning did not pose health risks, and more than half the salons denied that the fake sun increased risk of cancer. Many described such statements as "rumor" and "hype," according to the report, and more than three-quarters of salons said indoor tanning is actually beneficial to the health of a teen girl."  I was not shocked.  I am outraged that this is happening, but I know it is happening.  I was happy that this was brought to light and I hope that something is done about it.


A tanning salon's website that I recently came across, had many such lies on it.  It was so disturbing to me. Here is a short except:
"Q. Why do we always hear that tanning is bad?
A. Tanning is an important issue to the dermatology industry because skin cancer represents the only subject that its lobbyists can promote as critical or life threatening. Unfortunately, in their zeal to scare consumers into their offices, lobbyists for the dermatology industry have twisted the facts and exaggerated many research findings. They continue to mislead the public about the dangers of tanning, whether indoors or outdoors.
There is also the issue of the “Almighty Dollar.” The fear of the sun generated by dermatologists feeds a multi-billion dollar industry lead by huge special interest groups who conduct and promote most of the research on skin cancer. Lobbyists for pharmaceutical firms that sell billions of dollars worth of sunscreens and SPF cosmetics have teamed with the dermatology industry to promote a misinformed campaign of sun abstinence.
Conversely, there is no major industry except the indoor tanning industry that makes money by promoting the positive effects of sunshine. The indoor tanning industry consists of small companies that can’t match the marketing power of the multi-billion dollar "sunscare coalition."
Over the last few years, thousands of indoor tanning professionals have supported an organization – the Indoor Tanning Association – which was founded “to protect the freedom of individuals to achieve a suntan, via natural or artificial light.” This organization is currently working to develop a national advertising campaign that will increase public awareness of “smart” tanning, the importance of avoiding sunburn, and the many positive effects of regular, controlled UV exposure."

I especially like the part where they claim that " The fear of the sun generated by dermatologists feeds a multi-billion dollar industry lead by huge special interest groups who conduct and promote most of the research on skin cancer."  When I first came across their facebook page, I posted on their wall, pictures of my leg and facts about melanoma and skin cancer, as did some of my friends.  We were found out and blocked from their facebook page.  Guess they didn't have any facts that tanning doesn't cause melanoma to counter attack with.  Pictures speak a thousand words.

As I browsed through their website further, I came across an article that was written in the local newspaper, by the owner/founder of this particular chain of tanning salons.  It is called, "Sun Is Life".  This publication states:

WHAT!?  I believe these people twist the facts to suit their needs without any regard for people's lives.  It is for them, all about the mighty dollar.  It is very disgusting to say the least.  I hope that the FDA will step in and regulate tanning beds.  To say that tanning protects against melanoma is sickening.  I for one, know for a fact that they cause melanoma.

The other disturbing faux pas recently, was by the television doctor, Dr. Oz.  He had Dr. Joe Mercola, on his show who has controversial ideas.  He was talking about vitamin D and "safe tanning".  Dr. Oz then stating he was rethinking his views on indoor tanning.  He was later flooded by those of us in the melanoma community to retract this statement.  He then posted this on his website.  Although, we are relieved he has stated that he has not changed his thinking that tanning beds could be safe in any way, he has yet to voice this on the air.  The tanning salons have posted his views that tanning could be beneficial for vitamin D and ran with it.  Another way for people to feel safe doing something that is definitely NOT SAFE!!  Later it was discovered by my friend, that Dr. Mercola has his own line of tanning beds.  Hmmm.  I won't make any assumptions, but it seems kind of strange that Dr. Oz was suddenly promoting tanning bed use.  Dr. Oz also has posted a mother's story on his website along with his "retraction".  Jaime and many others have lost their lives due to melanoma.  Is it enough?  I think he should do a show dedicated to melanoma and skin cancer, the dangers, prevention, etc.  I hope that he will consider this.

Exciting things are happening.  Bills are hopefully going to be passed soon preventing teens under 18 in many states to tan in tanning beds.  I am especially excited about the one in the state of Michigan.  I live in Michigan and I know there are many tanning due to the lack of sun for half the year.  There is research under way for a cure.  People are participating in walks to raise awareness and money for research.  And sad things are happening. Families are burying their loved ones after watching them suffer.  I have lost too many to this horrible cancer.  I am scared daily, because I have it and I know it can come back at any time. Young people are now getting melanoma, which used to be an "older man's cancer".   There is NO CURE for melanoma. But we have HOPE.  We have FAITH.  And we have EACH OTHER.  I wouldn't trade my mel-pals for anything.

My sixteen year old daughter said it best.  "If you tan, you will be "sun-dead"".  Yep, she is a smart kid.  She is her mother's daughter.  And she will NEVER tan!
Posted by Unknown at 8:25 PM 4 comments: